This unique designed pendant was inspired by the  Jerusalem Famous David Tower.

Pendant is made of 925 Sterling silver frame, Authentic Jerusalem stone that was engraved to the image of King David’s Tower.

It is also Decorated with height quality Garnet gemstone. 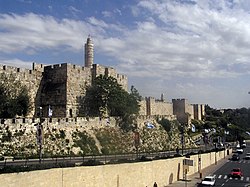 The Tower of David and the City walls (wikipedia)

The Tower of David (Hebrew: מגדל דוד‎, Migdal David, Arabic: برج داود‎, Burj Daud), also known as the Jerusalem Citadel, is an ancient citadel located near the Jaffa Gate entrance to western edge of the Old City of Jerusalem.

The citadel that stands today dates to the Mamluk and Ottoman periods. It was built on the site of a series of earlier ancient fortifications of the Hasmonean, Herodian-era, Byzantine and Early Muslim periods, after being destroyed repeatedly during the last decades of Crusader presence in the Holy Land by Ayyubid and Mamluk rulers.[1] It contains important archaeological finds dating back over 2,000 years including a quarry dated to the First Temple period, and is a popular venue for benefit events, craft shows, concerts, and sound-and-light performances.